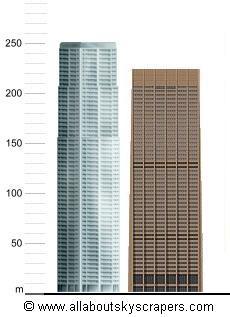 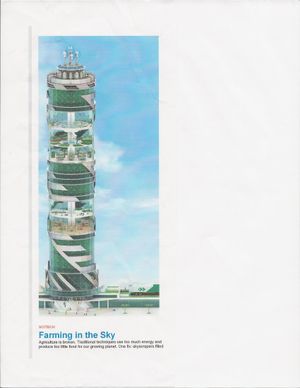 Never doubt that a small group of thoughtfully committed citizens can change the
World; indeed it’s the only thing that ever has.
Margaret Mead 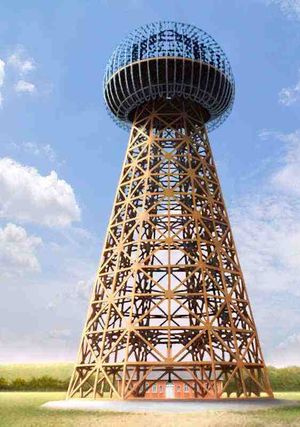 TESLA COIL
A Tesla coil is a type of resonant transformer circuit invented by Nikola Tesla around 1891.[1] It is used to produce high voltage, low current, high frequency alternating current electricity. Tesla coils produce higher current than the other source of high voltage discharges, electrostatic machines. Tesla experimented with a number of different configurations and they consist of two, or sometimes three, coupled resonant electric circuits. Tesla used these coils to conduct innovative experiments in electrical lighting, phosphorescence, x-ray generation, high frequency alternating current phenomena, electrotherapy, and the transmission of electrical energy without wires. Tesla coil circuits were used commercially in sparkgap radio transmitters for wireless telegraphy until the 1920s,[1][2][3] and in pseudomedical equipment such as electrotherapy and violet ray devices. Today their main use is for entertainment and educational displays.

The Mic:Any embarrassing moments on stage?
Nothing worth talking about!
What I think is worth Talking about however is setting up a concert, wherein four distinct music genres
PERFORM Rock & Roll – Hip Hop - Jazz and Folk, each definite music style is voted on and the Group within the particular genres that gets the most votes gets money a trophy and bragging rights. The concert will be televised on stations around the world and on the internet Webcast Live. CBS alone reaches millions with over 600 streaming

Stations and the newest entrant into the field groundbreaking mobile applications
Not to mention AOL. Raadio Yahoo! Music and Xbox.
People will call-in and vote and pledge money and support for the Lifetowers concept. And they get to vote for the music they are watching. This show
Can also be re-broadcast and also sold on DVD’s.
Selling the idea for a prototype of LIFETOWERS will be easy with the right visual dramatic presentation . The trouble the world is in today people are searching for anything that can help answer the problems of the world needs. So a concert like
the “Ten Years To Solve World Hunger” can only educate and entertain all who experience it.

The LifeTowers none profit Corporation group gets the money to build a
Lifetower prototype that can feed, employ and power each city one is constructed in…

This concept that Once it’s begun it will transform the way in which food, energy and communications are created and delivered and it will revolutionize the world.

When I was a student studying social engineering at Clark University I wrote a paper entitled “!0 Years To Solve World Hunger” and submitted at Christmas time for a mid term
Paper, To my absolute surprise my professor sent it back to me by FedEx and gave me
a grade of A+ and asked that I get it published, frankly I was delighted, I had worked hard on the paper and made sure that my facts where all in order. I didn’t have the resources so I published it in the inside cover of my first album.” In Another World”
You can still get that physical album at Amazon .Com.
I will put up a website titled “LifeTowers.com” That will be a full presentation to explain all the elements of the Lifetowers and the “Ten Years to solve world hunger” and why this concept must not fail it is absolutely necessary for the salvation of the humane race.

"Problems cannot be solved at the same level of awareness that created them."
- Einstein 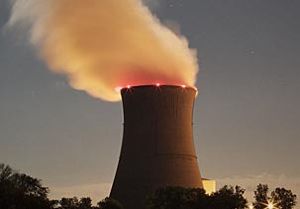 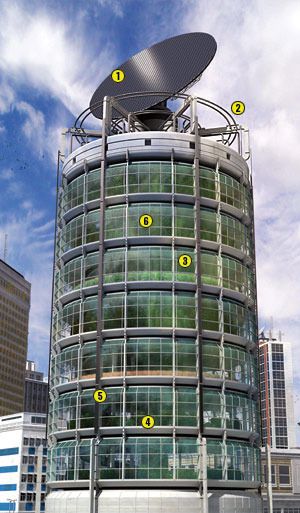 Urban farming has always been a slightly quixotic endeavor. From the small animal farm that was perched on the roof of the Upper West Side’s Ansonia apartment building in the early 1900s (fresh eggs delivered by bellhop!) to community gardens threatened by real-estate development, the dream of preserving a little of the country in the city is a utopian one. But nobody has ever dreamed as big as Dr. Dickson Despommier, a professor of environmental sciences and microbiology at Columbia University, who believes that “vertical farm” skyscrapers could help fight global warming.

Imagine a cluster of 30-story towers on Governors Island or in Hudson Yards producing fruit, vegetables, and grains while also generating clean energy and purifying wastewater. Roughly 150 such buildings, Despommier estimates, could feed the entire city of New York for a year. Using current green building systems, a vertical farm could be self-sustaining and even produce a net output of clean water and energy.

Despommier began developing the vertical-farming concept six years ago (his research can be found at verticalfarm .com), and he has been contacted by scientists and venture capitalists from the Netherlands to Dubai who are interested in establishing a Center for Urban Sustainable Agriculture, either independently or within Columbia. He estimates it could take a working group of agricultural economists, architects, engineers, agronomists, and urban planners five to ten years to figure out how to marry high-tech agricultural practices with the latest sustainable building technology.

What does this have to do with climate change? The professor believes that only by allowing significant portions of the Earth’s farmland to return to forest do we have a real chance of stabilizing climate and weather patterns. Merely reducing energy consumption—the centerpiece of the proposal Al Gore recently presented to Congress—will at best slow global warming. Allowing forests to regrow where crops are now cultivated, he believes, would reduce carbon dioxide in the atmosphere as least as much as more-efficient energy consumption.

There is another reason to develop indoor farming: exploding population growth. By 2050, demographers estimate there will be an additional 3 billion people (a global total of 9.2 billion). If current farming practices are maintained, extra landmass as large as Brazil would have to be cultivated to feed them. Yet nearly all the land that can produce food is already being farmed—even without accounting for the possibility of losing more to rising sea levels and climate change (which could turn arable land into dust bowls).

Depending on the crops being grown, a single vertical farm could allow thousands of farmland acres to be permanently reforested. For the moment, these calculations remain highly speculative, but a real-life example offers a clue: After a strawberry farm in Florida was wiped out by Hurricane Andrew, the owners built a hydroponic farm. By growing strawberries indoors and stacking layers on top of each other, they now produce on one acre of land what used to require 30 acres.

Why build vertical farms in cities? Growing crops in a controlled environment has benefits: no animals to transfer disease through untreated waste; no massive crop failures as a result of weather-related disasters; less likelihood of genetically modified “rogue” strains entering the “natural” plant world. All food could be grown organically, without herbicides, pesticides, or fertilizers, eliminating agricultural runoff. And 80 percent of the world’s population will be living in urban areas by 2050. Cities already have the density and infrastructure needed to support vertical farms, and super-green skyscrapers could supply not just food but energy, creating a truly self-sustaining environment.

Like the Biosphere 2 project in Arizona, a real vertical farm will probably require a utopian philanthropist with deep pockets. In the eighties, Edward Bass spent $200 million of his own money to construct the Biosphere. A smaller and less complex vertical farm would probably cost that much to build today and could be funded by someone from a country where arable land is already in short supply, such as Japan, Iceland, or more likely Dubai. Despommier is convinced the first vertical farm will exist within fifteen years—and the irony is, oil money could very well build it.


1. The Solar Panel
Most of the vertical farm’s energy is supplied by the pellet power system (see over). This solar panel rotates to follow the sun and would drive the interior cooling system, which is used most when the sun’s heat is greatest.

2. The Wind Spire
An alternative (or a complement) to solar power, conceived by an engineering professor at Cleveland State University. Conventional windmills are too large for cities; the wind spire uses small blades to turn air upward, like a screw.

3. The Glass Panels
A clear coating of titanium oxide collects pollutants and prevents rain from beading; the rain slides down the glass, maximizing light and cleaning the pollutants. Troughs collect runoff for filtration.

4. The Control Room
The vertical-farm environment is regulated from here, allowing for year-round, 24-hour crop cultivation.

5. The Architecture
Inspired by the Capitol Records building in Hollywood. Circular design uses space most efficiently and allows maximum light into the center. Modular floors stack like poker chips for flexibility.

Atypical farm burns vast quantities of fossil fuels to plow fields, sow seeds, reap harvests and truck products many miles to population centers. It spreads heaps of petroleum-based fertilizers, which then run off into streams and watersheds. It also consumes rivers of freshwater and casts pesticides across the countryside. Raising chickens and pigs further insults the earth with unhygienic filth.

Why not grow grains, vegetables and fruits right where the expanding crowds of consumers are: in the middle of a city, inside a tall glass building? Poultry and pork could be reared there, too. A vertical farm would drastically reduce the fossil-fuel use and emissions associated with farm machinery and trucking, as well as the spread of fertilizer and its runoff. Crops could grow and be harvested year-round instead of at the end of one season, multiplying annual yield by at least four times. Urban agriculture could also convert municipal wastewater into irrigation water, reducing a city’s refuse problem. And consumers would get the freshest food possible, without pesticides.
Growing Vertical: Skyscraper Farming 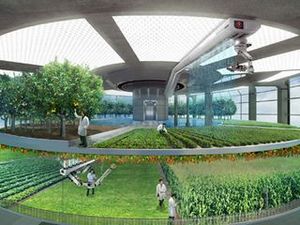 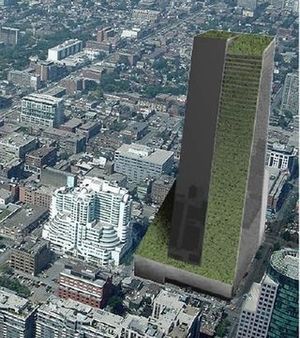 Vertical farms – Why waste land when you can grow food in skyscrapers?

Vert1 Soil-based agriculture is so passé. Nothing short of an agricultural revolution is underway, spurred on by visionary Dr. Dickson Despommier of Columbia University. His plan is to build 30-story greenhouses in cities around the world, which will allow us to produce more food, for less money, in a healthier way, while freeing up arable land for nature.
Listen up environmentalists! If you’re serious about relieving mother earth of her burdens as food producer, you can forget about unsustainable and inefficient organic farming (which requires far more space than non-organic). You need to end the hypocrisy and start proponing vertical farming, the viable solution to feeding all the world’s people - not just those who can shop at Whole Foods.

Vertindoor By growing crops without the use of soil - hydroponically - “fields” can be stacked on top of each other in urban areas, to grow fruits, vegetables, grains, you name it. The vertical farms work as a closed circuit, so all the water and nutrients are recycled, and only the produce actually leaves the building.

4. It re-uses the water by collecting it through de-humidification.

5. It has no need for the use of pesticides, fertilizers, or herbicides, and as such makes for healthier, clean food (even more so than today’s organic food which is prone to the bacteria occurring in for instance manure).

6. It drastically reduces dependence on fossil fuels, as the food needn’t be shipped to the city (because it’s there already).

7. There is no crop loss due to shipping or storage.

8. Reduced food costs as a consequence of reduced distance between producer and consumer.

9. Urban farms would create a cadre of related businesses in its vicinity, such as bakers, produce stores etc.

10. It would employ a lot of both skilled and unskilled labor.

11. Vertical farms would be entirely carbon free, and run on wind, solar, tidal or geothermal energy.

Imagine if all the world's farm land was no longer needed? It could be used for, well, nature. A transition to vertical farming could produce clean, cheap food in abundance. My only question is, Why aren’t we already doing this?

You can read more about this inspiring idea in the The Vertical Farm: Feeding the World in the 21st Century and watch the video below